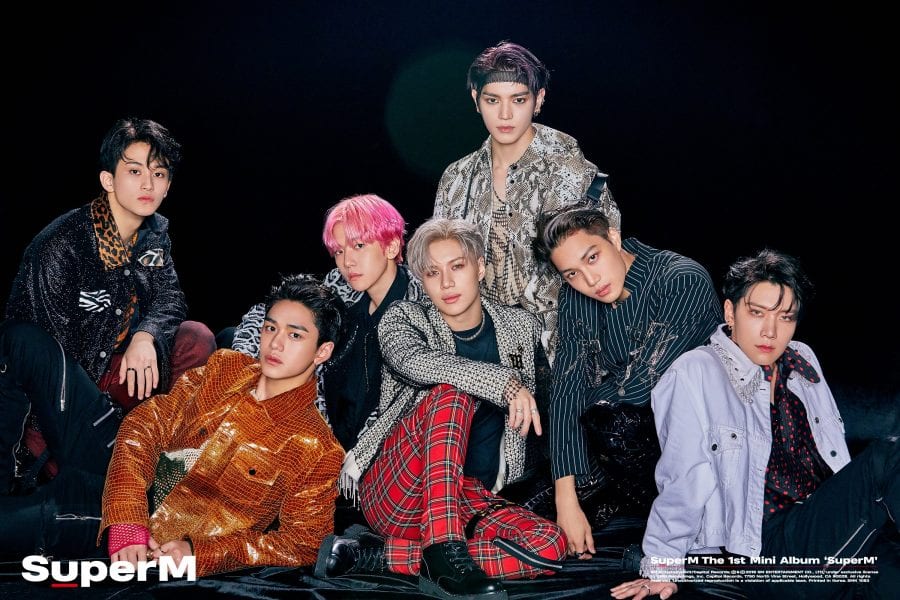 SUPER M is a 7-member super group under SM Entertainment (Korea) Capital Records (USA). The group consists of Taemin of SHINee, Kai and Baekhyun of EXO, and Taeyong, Mark, Ten, and Lucas of NCT. SM Entertainment founder Lee Soo Man announced that SUPER M will make their official debut in the United States on the October 4th, 2019 and that the group will be focusing on overseas promotions. The agency has not yet disclosed whether SUPER M will also be promoting within Korea. (Note: Positions are based on what they are in their own groups, they will be changed once the group debuts). 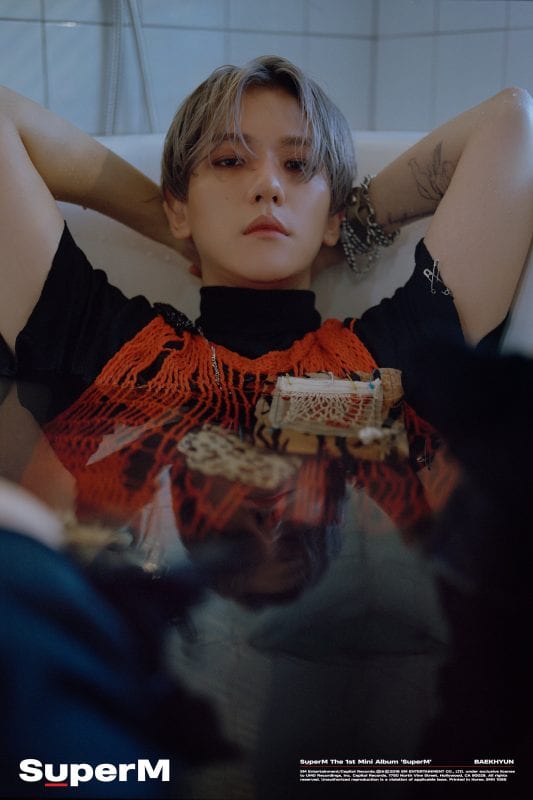 Baekhyun Facts:
– He was born in Bucheon, Gyeonggi Province, South Korea.
– He has an older brother named Byun Baek Beom.
– He went to Jungwon High School and Kyung Hee Cyber University.
– Personality: He has a powerful and charismatic voice and stage presence, but off the stage, he is a bright, cheerful, childlike person.
– Hobbies: Aikido, Piano, listening to music, watching movies, singing.
– His popular nickname is “Bacon”.
– Baekhyun wanted to become a singer since the fourth grade and told all his friends that he would be a celebrity when he grow up.
– When he was in high school, Baekhyun often made cute expressions so his friends would laugh.
– He was scouted by SM in front of his school gates (One of the SM representative was near his school and asked him if he wants to join SM).
– He officially became a trainee of SM in 2011.
– Baekhyun’s favorite foods are Korean food, Japanese food, Chinese food, Western food. He likes all food, he doesn’t discriminate.
– He doesn’t like cucumbers. Once, his mother offered him 5,000 won (approximately $5) if he eats a cucumber. But still, he wouldn’t do it.
– He launched his own fashion brand, “Privé by BBH”, on July 1st 2018.
– On July 10, 2019 he debuted as a solo artist, with the song “UN Village”.
– Baekhyun’s ideal type is a woman with full of charms.
Show more Baekhyun fun facts… 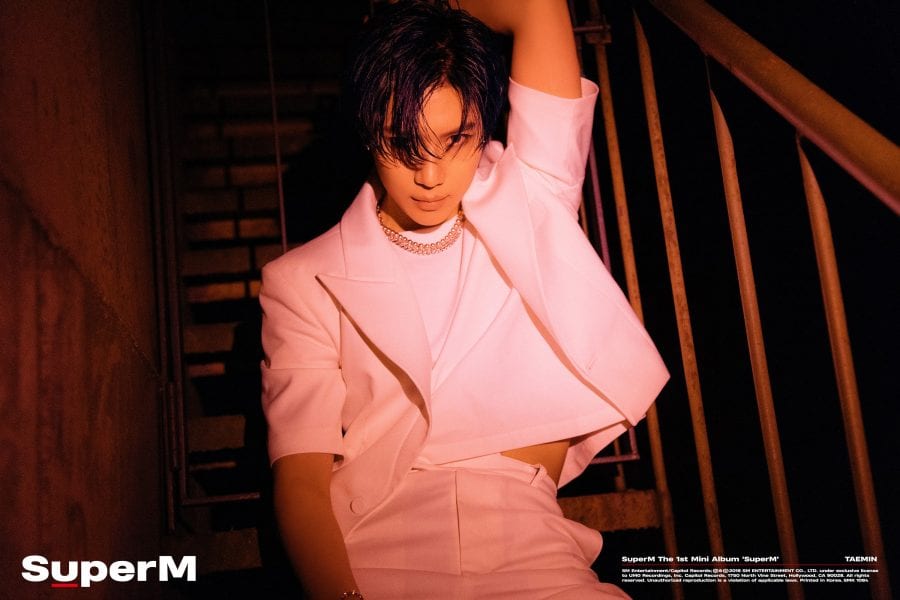 Taemin Facts:
– He was born in Seoul, South Korea.
– He has an older brother.
– His nicknames are Handy Boy Taemin, Maknae Taemin, Tae, Taememe, Dancing Machine, Taeminnie, Taem.
– Education: Hanlim Multi Art School (he transferred from Chungdam High School); Myongji University (Musical and Film major)
– He trained since 2005 S.M. Open Weekend Audition Casting
– He is Catholic.
– He can speak Japanese.
– He is afraid of bugs.
– Taemin was in “We Got Married” where he was paired with APink’s Naeun.
– Taemin’s on the show “Why Not The Dancer?”, where his nickname is Taem.
– Taemin’s ideal type: “I like someone that is consistent and true. I don’t like it when they hide their true selves and later reveal the true them.”
Show more Taemin fun facts… 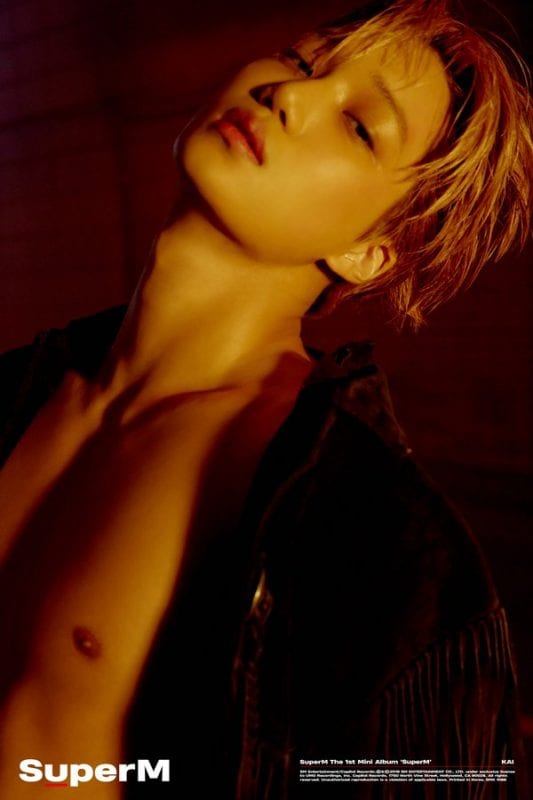 Kai Facts:
– He was born in Seoul, South Korea.
– Family: Father, mother, 2 older sisters (one 9 years older and another 5 years older)
– He went to Seoul Arts High School
– He was cast into SM Entertainment after winning the company’s Youth Best Contest in 2007.
– He was the first member of EXO-K to be introduced.
– He appeared in 13 EXO teasers before the group finally debuted.
– His dance specialties include Ballet, Jazz, Hip Hop, Popping and Locking.
– He’s got several nicknames over the years: Asia’s first love (for his solo performance “Deep breath” in Japan, Sun-kissed boy (due to the beautiful golden colour of his skin), Idol’s idol (since a lot of idols pick him as their role model, Olympics secret weapon (after his solo stage at the Opympics), Subway angel (after his photoshoot for “Big Issue” which he did for free to help the homeless), K-Pop’s sharpest dancer (by the editor of Lined magazine)
– Personality: Though some people may consider him cold and arrogant judging by his stage persona, he’s actually kind-hearted, quiet, shy and very gentle
– Kai is ranked 51st on TC Candler “The 100 Most Handsome Faces of 2018”.
– On January 1, 2019 it was revealed that Kai is dating Jennie from Black Pink.
– On January 25, 2019 SM Entertainment confirmed that Kai and Jennie broke up, in order to focus on their personal careers.
– Kai has taken on the honor of becoming Gucci‘s first ever Korean Global Ambassador.
– Kai’s ideal type is someone like Han Yeseul. Someone who is gentle and affectionate.
Show more Kai fun facts… 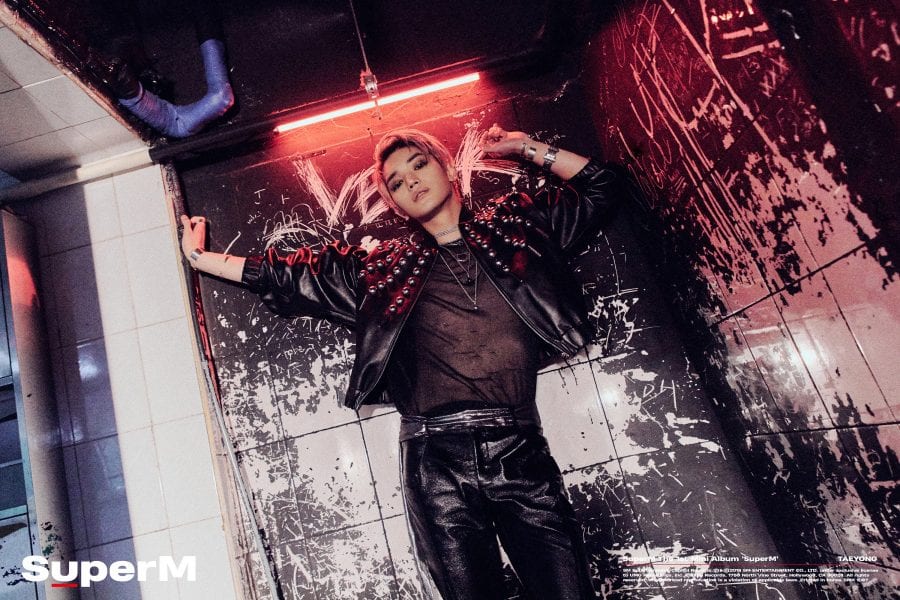 Taeyong Facts:
– He was born in Seoul, South Korea
– Taeyong has an older sister (born in 1988).
– Nickname: TY (given by SM producer, Yoo Young Jin)
– He’s called Tyong by his friends. (MTV Asia Spotlight)
– Education: School of Performing Arts Seoul
– When he was in school, his favorite subject was art.
– When he was still in high school, he rode a bike to school everyday.
– Before joining SM Entertainment, Taeyong dreamed of being a firefighter.
– He was casted in SM Entertainment in 2012.
– Strengths: Very confident, very nice, caring towards other members, looks cold on the outside but is actually a very kind person
– Specialty: Rap
– Body secret: small waist
– Shoe size: 265 mm
– Taeyong’s ideal type: “Someone who can teach me, lead me, and make up for my flaws.”
Show more Taeyong fun facts… 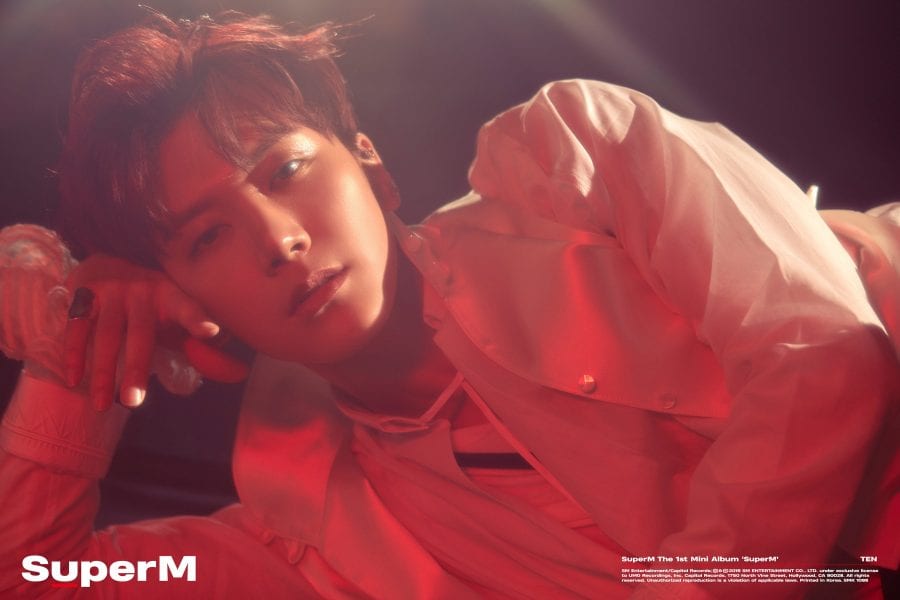 Ten Facts:
– Ten is ethnically Chinese but his nationality is Thai.
– Ten has a sister that is younger by 3 years, named Tern Kulisara Leechaiyapornkul (she’s a designer).
– Nickname: TNT (Ten), Cute Devil
– Education: Shrewsbury International School
– Shoe size: 270 mm
– Specialty: Basketball, Piano, Dance, Rap, Taekwondo, Surfing
– He speaks Thai, English, Korean, and Mandarin.
– He can play the guitar and the piano.
– He has many piercings.
– Hobbies: Sports, Drawing, Singing, Dancing, Rapping, Playing with animals
– Favorite Season: Summer
– Favorite Number: 10
– Favorite Color: Black
– Ten’s ideal type: he does not have an ideal type and he “likes a relationship which starts from learning about each other before developing to love” (Daejeon fansign on 180323).
Show more Ten fun facts… 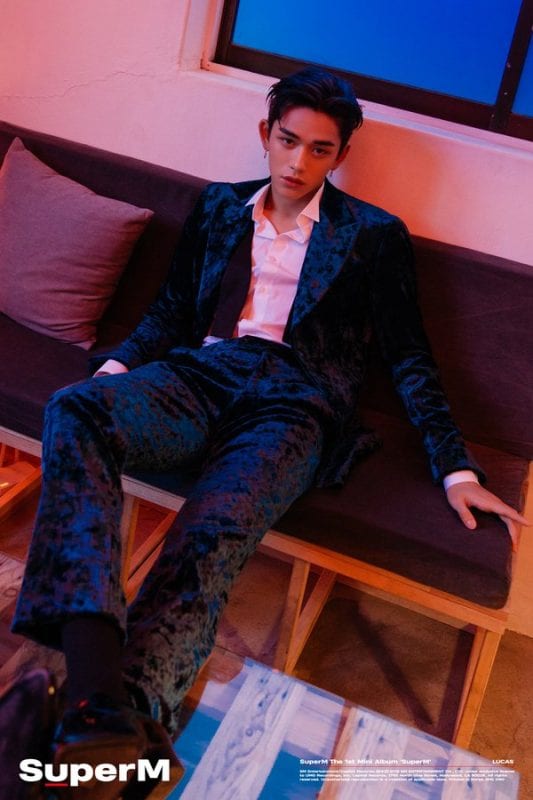 Lucas Facts:
– He was born in Hong-Kong, China.
– Lucas is half Chinese and half Thai.
– Family: His father is Chinese, his mother is Thai. He has a younger brother.
– He was introduced as a new S.M. Rookies trainee on April 5, 2017.
– He speaks Cantonese, Mandarin, English and Korean.
– Lucas’ ambition before becoming an artist was to become a firefighter (Running Man ep.4)
– He can speak a bit of Thai (Got7’s BamBam said he’s not very good tho)(Knowing Bros ep. 141)
– Shoe size: 280 mm
– Body Secret: He has a strong digestive ability
– Habit: Touching his rings
– Specialty: Winking
– His Chinese zodiac is Tiger.
– He appeared in TEN’s “Dream in a Dream” MV.
Show more Lucas fun facts… 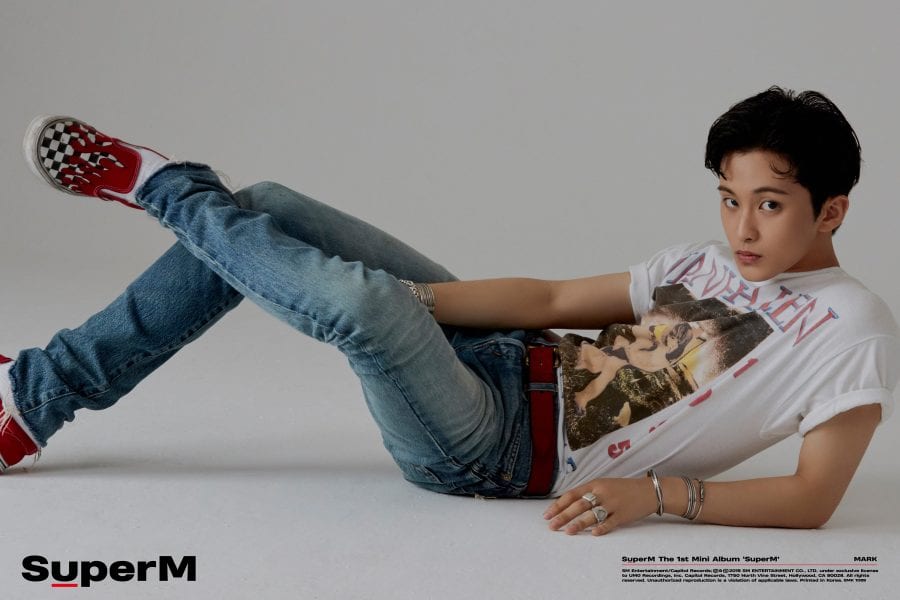 Mark Facts:
– He was born in Toronto but moved to Vancouver, Canada at a very young age. (vLive)
– He has an older brother.
– Education: Eonju Middle School; School of Performing Arts Seoul (graduated on February 7, 2018)
– He was cast through the SM Global Audition in Vancouver, Canada.
– His older brother was the one who encouraged him to pursue a music career.
– He was a trainee for 4 years.
– Specialty: Rap, Guitar
– NCT position: No jam
– Mark has lived in four cities in his life: New York, Toronto, Vancouver, and Seoul.
– He speaks English and Korean.
– His favorite foods are: Bagels, Cookies and Cream flavoured Ice Cream, Chicken, Kimchi, Rice, Watermelon, Jajangmyeon, Cookies, Chips, Bread, Chocolate
– His favorite drinks are Coca-Cola and Banana Milk.
– Mark’s ideal type: Someone who has long black hair.
Show more Mark fun facts…

Note: Please don’t copy-paste the content of this page to other sites/places on the web. Please do respect the time and effort the author put in compiling this profile. If you need/want to use info from our profile, please kindly put a link to this post. Thanks a lot! 🙂 – Kprofiles.com

Who is your SUPER M bias?

You or your IP had already vote.

Who is your SUPER M bias? Do you know more facts about them? Feel free to comment below. 🙂